After a discussion in comp.sys.sinclair, it was discovered that many people were pants at this fantastic game. Almost everyone was, in fact. Except me, being the Baby-Master (er, or something) that I am. Apparently.

Anyway, I decided to relieve the frustrations of those less fortunate than me, by imparting this players guide to them. Be thankful, mortal fools… 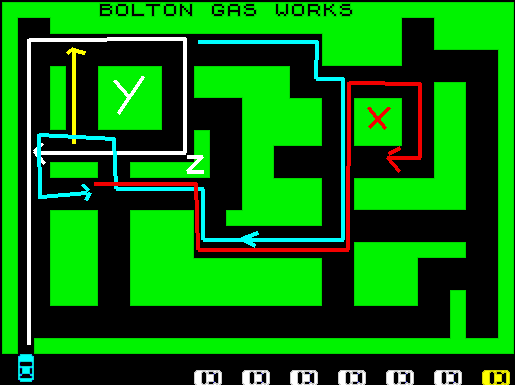 Not too difficult. Follow the white line around the two blocks in the top left, and drive around then two or three times. Then nip up the yellow line, and drive round again. Do this a few more times, and then follow the blue line. Now the red line – trying to double back on the blue as much as possible.

Drive round block X now, until you can see what’s going on. Try and drive anticlockwise round it a few times too. If there are cars left, figure-of-8ing round Y and Z should help. Double back if you can too. Under the word ‘GAS’ is a good place to be when the yellow PC lets rip – pelt it down the left of the screen as soon as he passes you going right. 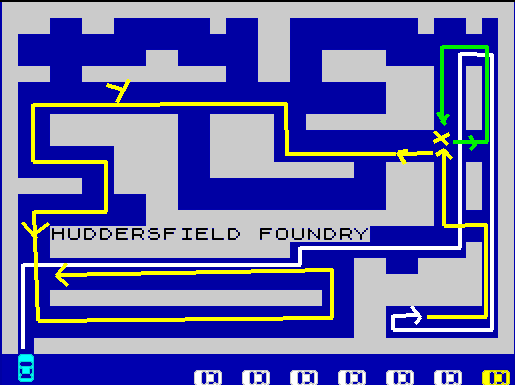 That should have sorted out at least 3 cars, maybe 5 if you’re lucky.

Now drive round the bottom long, thin block loads of times. If you have time, drive the opposite way round too. Now go back up to the X (up the right of the screen) and repeat the green and yellow line. Be near the Y when the last PC dies, and head down the left of the screen.

Extra tip!
Don’t go up in the top left – it’s too fiddly, especially if the speed has picked up. 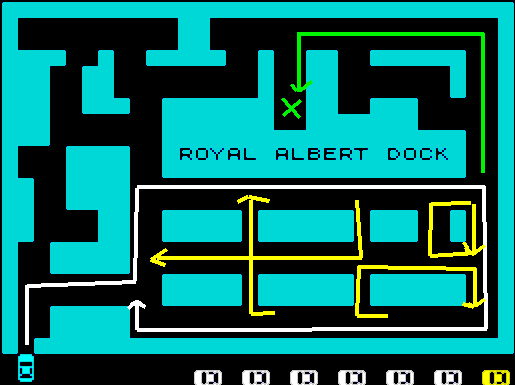 Follow the white line, and then proceed to circle the blocks over and over until all the PCs are driving round. Now be daring and cut through the gaps (like the yellow lines show). Do it a few times, trying to cross over your tracks, and then head up the green line to the X.

Hopefully, the closest PCs are dead now, so spin (hold N or M) a few times here, then spin the other way. Drive in and out of the X area too, and do all this until a PC starts up the green line. Now follow the blue line back into the fray (if possible) and repeat the whole thing avoiding the triangles. As soon as the last PC bites it, drive up to the X again and stay there until the Yellow PC has finished going right and starts left – now head down the right of the screen.

Extra tip!
Stay away from the left of the screen if at all possible – it’s more trouble than it’s worth. 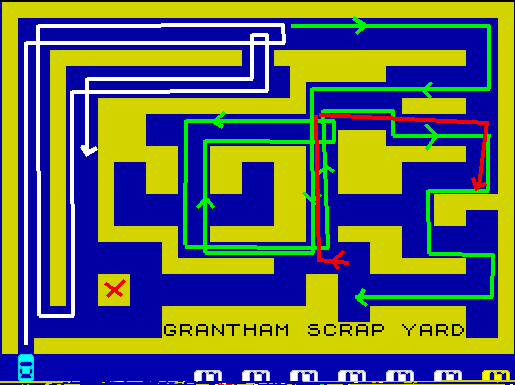 This level can be tricky. Firstly, follow the white line exactly. Now go back to the start and try and follow it again – only ‘swap lanes’ if possible. When it gets too difficult, try to follow the green line instead.

If possible, and you’re not scared, take the red route. If not, go and circle (one way, then the other) round block X. Drive around doing lots of crossovers and double backs near the top of the screen then, and you should be OK. Easiest way down is down the left of the screen. 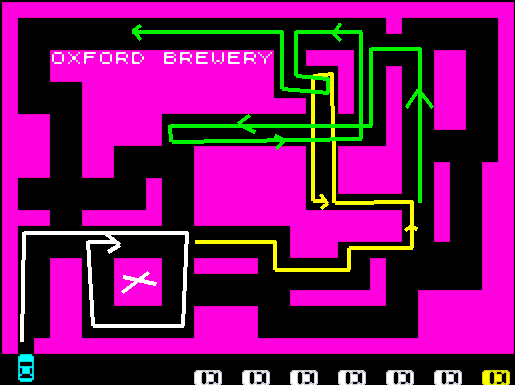 Fairly hard this one. Follow the white line round the X and drive round it a few more times, then head along the yellow line – timing it so you don’t crash on the double-back in the one-block-wide bit. Now follow the green line – but be careful!

Most of the PCs (perhaps all) of the PCs will have snuffed it now, so follow similar routes over and over. Try to head above the Oxford sign when the last PC dies, and drive down the left of the screen as the yellow PC goes right.