See, its a crazy world we’re living in, and I just can’t see that half of us immersed in sin. 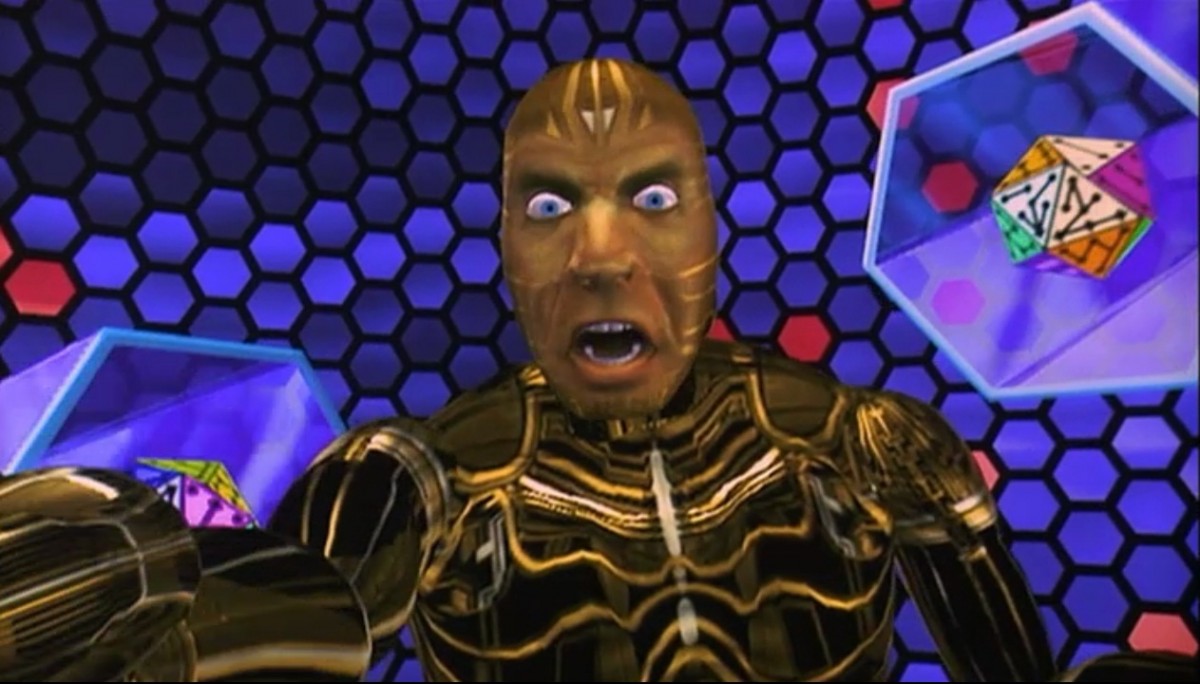 (This suggestion provided by @thermalsatsuma)

what’s your take on VR. Is it finally going to work this time or will all these expensive sets be gathering dust in a year?

A very long time ago (a VR long time ago?) there was a Virtual Reality device called Virtuality. Or perhaps it wasn’t a device, more a gaming platform built around (if I recall correctly) an Amiga, a headset, a gun-like controller and a sort of podium you stood in. It was on Tomorrow’s World, and it was very exciting. So exciting, that when I saw it taking up a massive amount of space in an arcade in Blackpool in the early 1990s, I simply had to have a go.

I suspect it was terrifically expensive. More than a pound, which was already the entry point for the likes of Mad Dog McCree, certainly. Perhaps even a fiver? That’s about £400 in today’s money, but I had no choice – the game was there and had to be played.

Surprisingly, I’ve forgotten most of what I experienced while strapped into that machine (although it’s usually good general advice to try and forget what happens to you when strapped into a machine, I think). The headset didn’t fit very well, is the main thing I do recall. I’m not even 100% sure which game I actually played. I certainly don’t remember the name, but – perhaps due to the foresty livery accompanying the Virtuality event – I always think it was some sort of Robin Hood type game. I had a bow in the game, perhaps? Looking at the list of released games for the system, Legend Quest seems to be the closest match to my memory. This YouTube video is familiar, anyway:

Two other things I remember are these: 1) Laaaaaaaaag. 2) It was over very quickly. Too quickly for £5. The lag was of the form that when you move your head, the environment didn’t keep up. Although I’d never been drunk at the time, with hindsight it was quite similar.

The game itself was much like a Freescape game, albeit at a higher resolution, polygon count and speed than those I was used to on my Spectrum at the time, but it was all a bit disappointing to be honest.

Virtual Reality now, in the form of Sony’s PlayStation VR, the HTC Vive and the Oculus Rift (as well as others, I’m sure) is essentially a more modern version of the same thing. It’s still 360 3D space, it’s still a headset, it’s still a controller in your hand. It’s a lot faster, more detailed and realistic, but then so is a PS4 compared to a NES. They all fix most of the problems the older Virtuality equipment, and they’re certainly much more affordable, but will they take off?

I’m going to say no. Not really. At least, not for games.

There’s a definite application for the technology, in science and medicine especially. Examining CT scans in full 3D, pairing it with a remote device for exploration of dangerous or otherwise inhospitable places like under the sea. Education, perhaps. There’s certainly a use.

But for games? I don’t think it’s going to work long term. Like 3D, I think it’ll be an impressive fad, mostly ignored within a few years. I’ve not tried any of these new devices, so I can’t speak from first person (aha!) use and I really must stress that, but some observations based on other people’s experiences, and reasoning:

It’s tiring. The consensus seems to be that a combination of the physical weight of the thing and the immersive nature of VR is simply more demanding than you might expect. As a result, it isn’t suited for long play sessions. Things can be done to offset this, such as minimising the amount of head movement and offering shorter styles of game, but that is negating some of the appeal of Virtual Reality, surely?

Nobody is quite sure what to do with it yet. Like the Wii’s motion controller, or Kinect, there’s some excellent technology. The problem is, what exactly do you do with it? Even as an advocate of the Wii remote I can’t deny that there were a lot of dire minigame compilations for the Wii, and Kinect suffered similarly. This also ties in with the long game issue I’ve just mentioned – nobody wanted to waggle for hours. Now I understand VR is a different sort of technology, but at the moment I can see games in two camps: VR versions of current games (like Call of Duty) where the VR just adds immersion, and new experimental games that couldn’t really be done without VR. I’m sure both are great, but how much more money is needed to develop the former (and will some games come in standard, and more-expensive VR versions?), and how shallow are the latter? Will the returns be worth it?

3D died. Yes, I love the 3D on my 3DS, but if it wasn’t there any more it wouldn’t affect many games. It was very impressive to begin with, but the benefits are not really worth the performance hit in most cases. I can see VR going the same way, especially for the PlayStation model where, as it reaches the end of its life and games are trying to squeeze out everything the hardware has to give, VR will be an unnecessary burden.

It’s still pretty expensive. It’s (a lot) more money than a decent 3D TV set, and since it can only be used by one person at a time, isn’t a sound investment for many families. Yes, families. All us old geeks who like new tech can see a reason, but families – especially those with more than one child – aren’t going to be able to afford this. One of the reasons 3D was a pain for families was the cost of a set of 3D glasses for everyone – this is going to be a hard sell for those. And those who were already “bitten” by other fads like motion controls and so on.

Health risks. I don’t believe there are any. None serious or permanent anyway, but with plenty of people already feeling nauseous from Virtual Reality experiences coupled with You Know How The Media Love This Sort of Thing (cf. the 3DS 3D’s eye exploding feature), it’s going to happen evidence or no. There’ll be stories of people walking into stuff or getting dizzy and collapsing before you know it. Would it bother me? No. But I am not a tabloid reader. And what happens when the game glitches and you get those strange clipping problems in first person? Eurgh.

It’s still not Virtual Reality. That’s right, it isn’t. You can look where you want, you can virtually poke stuff and virtually manipulate stuff, but there’s no actual spacial movement outside of arm flail. It’s not first-person Knightmare yet. That technology, with rollers on the floor or whatever, certainly exists but not as part of this round of VR devices. Without it, you literally just have a TV strapped really close to your eyes: Immersive as that is, it’s not properly fully realised Virtual Reality. Not yet, anyway.

Google Cardboard. You can put your phone in box and that’s just the same, right? Right.

As I’ve said, we are a world away from the old Virtuality days. Everything is vastly improved and works better in almost every way, but will enough people buy it – and stick with it – for it to hang around this time? I really don’t think so. For specific, mainly non-gaming purposes, it will be there – but it already is, albeit in a more expensive and unwieldy form, so that doesn’t really count. For games? A few years of VR-enabled “normal” games, some mini-game collections, and some genuinely incredible new experiences. The latter of these won’t be enough to carry it though, and it’ll just cost too much to support for too little return.

Perhaps next time they try it, but for this round? In my opinion Virtual Reality is set to be cupboardised in the next few years. Dartboard time: I’m going to say… by 2020.

One thought on “VR Bloopers”