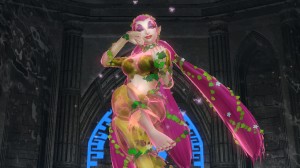 For many years I’ve lamented how the the 3D Zelda games (that is to say, those that aren’t top down rather than those you play with glasses) are, well, pants. Over my time as a gamer, I’ve never got into the Samurai/Dynasty Warriors series. I’ve played a few, and even bought the 3DS one, but stopped there.

So why did I have a moment of weakness and buy a download code for Hyrule Warriors, a combination of all that is bad about Zelda games and a game series I couldn’t be more meh about? I don’t know. But I’m glad I did because it’s bloody awesome.

Fans of games known as “Musou” (at least, known as that to nerds who propagate the idea the series is niche and, well, non-Japanophile gamers wouldn’t like it) will see this is little more than a Zelda skinned example of the genre. Battlefields filled with forts, allies, and more enemies than a feeble little Nintendo console should really be able to cope with – let alone with no slowdown, and generals to defeat. 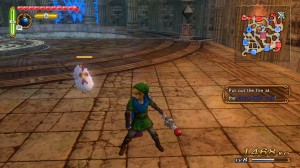 Only with Zelda clothes on, these battlefields are areas like Hyrule Field and Death Mountain. The allies are Impa and Sheik. The enemies are ripped straight from Zelda games, and the generals, instead of being historical samurai warriors, are bosses Link has previously defeated in “normal” Zelda titles. Massive bosses, in some cases. And cuccos. Yay!

Gameplay is just like in Warriors, where you take ground by capturing forts and regions, lose ground by not paying attention to what’s going on elsewhere in the map, and your allies run round doing the same with not the best AI in their heads. Ultimately, you can’t rely on them to do anything, so sometimes you need to abandon your current objective to save their hide – again – before returning to the task at hand.

A Zelda twist is that you can pick up secondary weapons from treasure chests (complete with obligatory DA DA DA DAAAAH). These are instantly recognisable: Bombs, Boomerang, Bow, Hookshot, and so on. You can probably guess the rest. You can also play as any of your allies instead of just Link, and you recruit more warriors as you progress in the game. Additionally, there’s a crafting part to the game where you can upgrade and enhance your weapons, and choose new perks and abilities, for the price of some materials that enemies drop and a bag of rupees.

Somehow, it manages to feel just like Zelda without actually playing anything like any Zelda game before it. Which is A Good Thing, as far as I’m concerned.

Of course, I’m only about 4 or 5 hours in at the moment, so there’s still time for everything to head south, but what would appear to be a repetitive button masher is actually an addictive and surprisingly varied action title. More of this sort of thing with your game serieses, please Nintendo.