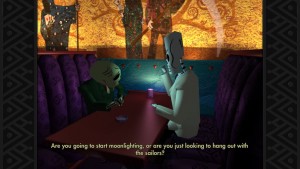 Well, Rubacava was annoying. I had two main issues: the first was the disjointed way all the locations fit together (meaning I kept getting lost), and the second was how the hell was I supposed to know there were two ticket booths that look identical but one is sort of hidden and you can only progress if you use that one. Gah!

Some of the puzzles I nailed just fine, but others were frustrating in that I knew the solution but the chain of events to solve it I kept doing out of order. Some were totally random, like locking the waiter in the cupboard, and there’s no way in hell I’d have figured out the forklift in the lift solution without help from Twitter. Thanks Twitter! 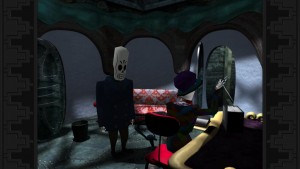 Anyway, I’m done with that place, and after a trip in a boat (with a fun anchor puzzle) and some wandering around underwater, I’ve finally caught up with Meche! Although things are not going as well as I’d hoped, not least because Domino has apparently murdered Glottis. Boo!

If you want to catch up with my playthroughs, I’ve a couple of videos here (so you can see for yourself how lost I got):