It’s that time again, where I perform an autopsy on my games spending over the last 12 months. Some real changes this year as well. Let’s have a look at how the total compares: 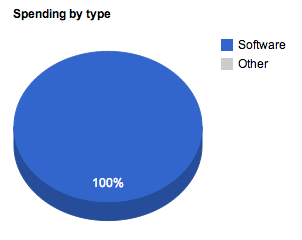 What about spending by platform? 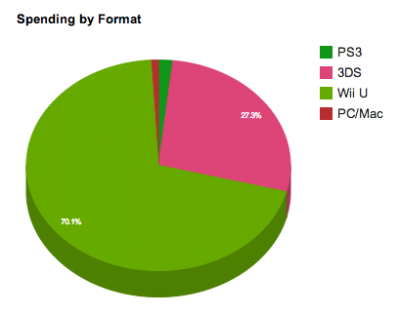 Firstly, you’ll notice something. No, not that the Wii U accounts for more than 70% of all my spending, and no, not that between my Nintendo consoles, more than 97% of the total expense is accounted for. No – the thing is that the 360 has gone. So has the Wii, the DS and iOS. Even PC/Mac, which was tiny anyway, has almost vanished. Have these platforms become dead to me? And somehow the PS3 hasn’t?

Not exactly. It just shows up a problem with this analysis I’d not noticed before. If games are free, they don’t show up. Indeed, I’ve had some 360 (and one DS, and a handful of iOS) games this year, but they’ve all been free. Either free as in no cost, or free as in gifts. In fact, some of the 360 games I’ve bought this year (Retro City Mayhem, Bastion, Brothers) have been as a result of free Microsoft Points. Some from the XBL Rewards program (RIP that), some from a NowTV trial, and some more from a trial for some other on demand video thing but I forget what. In fact, a fair number of 3DS and Wii U games have been free for various reasons too.

The final shock was in the Spending by Medium analysis: 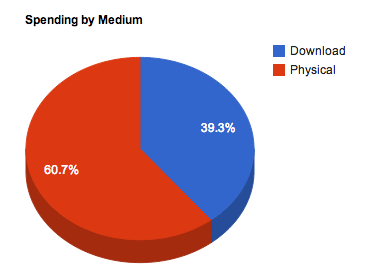 Sort of, yes. Again, it’s the free things skewing the results. All them free Xbox Live Arcade games. I managed to make use of the Nintendo So Many Games promotion more than once, combining it with the Monster Hunter promo, to get three downloaded titles for free. I’ve had £25 cashback on the Wii U Premium Account thing which I then spent in the eShop – more free games. Even those games I’ve paid for as downloads have been in sales or, in the case of PC and Mac titles, have been stupidly cheap (almost free, in fact) from Humble Bundle.

In terms of the number of downloaded games vs physical media games, it’s 72.4% download, 27.6% physical – a real shift to the disc/cartless game format.