I’ve been tracking which games I play, on my Gaming Diary, for 6 years now. It’s helped me realise how many different games I play, and how many I complete. This year, however, I’ve additionally started tracking the games I buy, and how much I paid for them – the aim being to scare myself into how much I spend on gaming.

Thing is, just knowing that it’s logged has actually made me more frugal with my spending. Not only did I decide early in the year to drop the £25 Rule to £20, but I’ve also been actively avoiding buying pretty much everything on release. Everything except that huge blip and rule-breaker that calls itself Fallout: New Vegas, at least. But more on that game another day.

You’ll notice I’ve also listed a few games with a cost of £nuffin. That’s because they were either genuinely free (lots of iPhone games were, and so was Guardian of Light on the 360) or were presents to me (therefore cost me nowt).

In all, I spent £590.32 this year. That sounds a lot, but I know for a fact it could quite easily be just one tenth of what it has been in previous years. Of course, no new consoles were bought in 2010, which helped keep the spending down a bit. 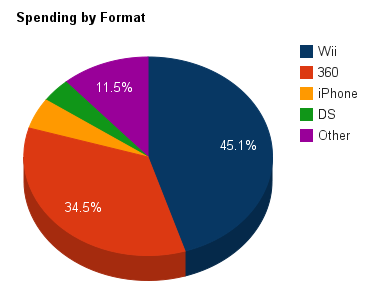 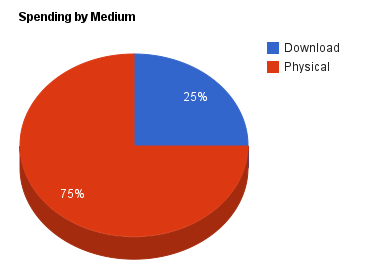 So what does this all tell me? Nothing I didn’t really know, actually. I found it a little surprising that almost exactly one quarter of my spending has been on intangible downloadable software, for the iPhone, Wii (WiiWare, Virtual Console) and Xbox Live Arcade as well as game downloadable content (such as Undead Nightmare and Dead Money). However, almost 4 years ago I predicted that the next generation of consoles will have downloadable content as the primary distribution mechanism. Things are certainly shifting that way!

The real “tell” with this data will be when I run the same calculations for 2011’s figures and compare them! Stay tuned.

8 thoughts on “The 2010 Gaming Expenditure Horror”