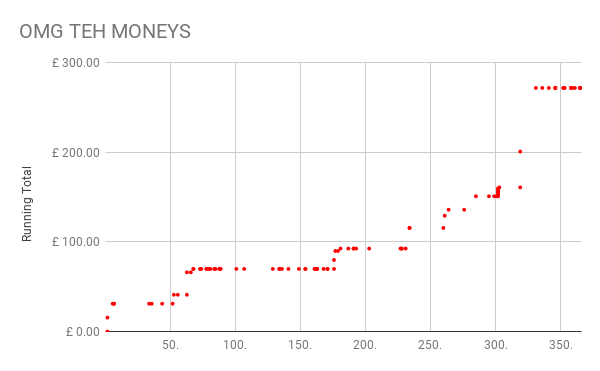 I’m sure I get round to this later and later each year. Maybe the 2025 report will be in 2028 or something. Anyway, the figures from previous years and then the 2018 Horror:

Wait what? Less then £300? In an entire year? That’s the lowest I’ve ever spent in a year since I started recording this back in 2010, and I suspect it’s the lowest ever since I got a full time job. So what happened there, then?

Well, the main thing is that I didn’t buy any hardware. No new consoles. Last time that happened was back in 2013, and you can see that 2013 was my previous spending low tide. More than this though, I really didn’t buy very much at all in 2018.

In fact, the biggest expense was Pokémon. As in, both Let’s Go games, and a Pokéball – these totalled £110.90, not far off half my entire year’s spending.

Anyway, time to breakdown the figures.

Not really a surprise to see that in a year when I bought virtually no hardware, the hardware slice is very small.

The first thing to notice is what is missing. No iOS, 360 or PC/Mac this year. There’s a slight drop (from 74.1% to 63.6%) for the Switch, but bear in mind that figure last year included the Switch itself! The Wii U still being there surprised me, but then I remembered I bought a second copy of Hyrule Warriors as I wanted a physical disk and my existing copy was digital.

Something to bear in mind is that I did actually get games from other platforms – but I didn’t pay anything for any of them. Some were presents, some were bought with digitial store vouchers given as presents, and quite a few were given out free from places like Humble Bundle on on giveaways on Twitter.

This was also a surprise, until I look into it deeper. The vast majority of the games I’ve bought in the last year were indeed downloads, but the majority of those were essentially free. Or indeed, very cheap. Plus those pesky Pokémon games skew things again too – they were both physical copies.