With one character, at least: all cash and goals on all levels GET!

That’s not the end though – oh no. There’s never really an end to proper Tony Hawk’s games anyway, but as well as having other skaters to play as, completing the game also unlocks a new game mode: PROjectives.

This is a new set of very hard objectives for each level. I’ve done all of them for The Warehouse already though 🙂

Besides doing that, I boosted my scores on some of the levels to remain top of my friends leaderboard. My overall score is about a million points ahead of that of the person behind me!

Let me say this:

It’s a remix of THPS1 and THPS2, with new graphics. Which is instantly awesome. It even retains some of the music from the originals. And it only cost £8-ish. And you know I like Tony Hawk games. Oh yes.

It came out last Wednesday, and I’ve played it a LOT since. It’s pretty much perfect. Some people are saying it has framerate issues (it doesn’t), it’s not big enough (it’s plenty big enough for the cost, and there’s DLC on the way anyway), or it’s full of bugs (there are some odd physics-based glitches following bails, sometimes, but that’s it). And for everyone saying it’s impossible to play on the 360 d-pad – you’re doing it wrong: Use the analogue stick, fools.

So far, I’ve 100%ed all the levels bar the final one (Marseilles), and even on that I only have two goals left to get. After that? Well, a run through with someone else of course!

I did play it online, as much as my shoddy connection would allow (thankfully lag isn’t important too much in this game) and that was fun. It’s a shame there’s no HORSE, or even any offline multiplayer, but they’re the only negative points I can stick in.

Oh Tony, Tony, Tony. Where did it all go wrong? Why, after the utter perfection that is THPS3 did you let your amazing series of amazing games turn into the shambles that is Ride and Shred? Oh Tony! Why have you forsaken me, your most ardent of skateboard game fans? Me, who has completed every single one of your games, before that sorry pair, so many times on so many platforms. I even completed the original game on the N-Gage! The N-Gage!

With THPS HD on the way soon, I was itching for some proper THPS gaming in preparation. So I dug out my Wavebird, a GC memory card, and THPS3, and jammed them all in my Wii.

I do wonder if THPS3 is actually the best game ever made ever. Ever. Ever.

TONY HAWK. He’s the best guy ever! Well, maybe Tom Jones is better. Hmm. But he’s still GREAT, and his games (aside from RIDE, but we’ll just forget that one…) are GREAT. And THPS2 is one of the MOST GREAT games.

And now it’s on the iPhone! 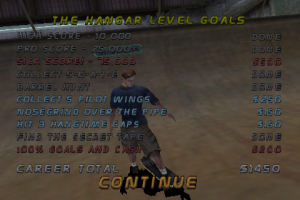 Amazing!  Surprisingly, it works really well. Controls are great (and I generally hate virtual d-pads and buttons), and pulling off tricks isn’t any harder than I remember from the Dreamcast and PC versions. There’s a bit of slowdown (though I got that on the PC a lot too), but nothing game breaking.

So far, I’ve got all bar the 100% goal on the Hangar, and around a third of the goals in the School. And it’s lovely.

Just three years and 9 days after buying it, I finally completed Downhill Jam!

Turns out I was just being rubbish last time, as today I sailed through the final Tier will no problems at all.

It seems that there’s another Tier after Tier 9. Yeah, Tier 10. Who knew?

And it’s very hard. In fact, I can only do the first event, and even that was a bronze (and I only just scraped through with that!). This must be the final Tier now though, I’m sure, as I no longer have a countdown to how many points I need before ranking up.

For reasons not entirely well known, I started playing this today. Well, started again. You see, I bought it with my launch Wii, but having only recently – at the time – hammered the “proper” Tony Hawk games (which I love) the different controls and mechanics just put me off. Odd, since they never bothered me in the DS version.

Anyway, I’m actually enjoying it. It’s not perfect, but it’s fun and surprisingly controllable. And so it came to pass that I’m already up to the final (I think) tier of events.

So I got my subwoofer working today. Good grief does it make a difference! Every skate-check gets a heavy thump, bailing makes a deep crunch, even aggro kicking gets a meaty whoomph from the speaker. Excellent!

As far as the game went, I (again) beat a few more street challenges, and then mopped up some more Classic and Hawk-Man goals. The Museum Classic goals were bloody difficult, although really shouldn’t have been. Could I natas spin the switches to turn on moon gravity? Could I hell.

Since today was mainly taken up with setting up my new surround sound kit, I didn’t spend long playing games. I did, however, break Tony out for a while and finished off the last Uber Goals, completing those remaining. The Pro one was really quite hard (on the Nail The Trick demo especially), until I realised you could manage more than one of the ten required tricks in one combo.

Then, as usual, I completed some more street goals. 87% done now, I think.

Yes, I did skip two days of playing games. I was busy! Mainly with resurrecting the dead. But then I came back… to Tony. Again. Can’t stay away.

So I thought I’d have a crack the Uber Goals again, and managed the Hardcore one without a problem. I haven’t attempted the Rigger one at all yet, and the Pro one? Not looking forward to trying that again. It was hard!

So about this “I’m done with the game now” post last night. It was clearly a lie, wasn’t it?

Completed Pro in two more Classic Goals runs, Am in a third, and one Am and one Pro for the Pac-Man-meets-Tony-Hawk “Hawk-man” runs. Not a chance in hell I’ll get Sick for any of the Classic or Hawk-man goals. They’re clearly not possible.

OK. I think after today’s session I’m “done” with this now. I’ll no doubt come back to improve on some of the bits I’ve only got Am on, or for a bit of a skate for fun. Or maybe I’ll play online a bit.

But I’ve done all the story goals in all the storylines, most of the skate spots, impressed all the pros and all sorts of other things. I’ve not done many “classic” goals though, I’ve just realised, so perhaps I’ll mop a few of them up too.

Bam’s challenge today was a pain. You have to find a load of “treasure” in the museum, and I just scraped the required 20 found, but all 35? I can only see another two, let alone reach them and find another 13! Pff.

I thought the game was about to take a turn for the crap when I realised Bam Margera was in it. His sections in “The Tony Hawk Dark Days Trilogy” (that’s THUG, THUG 2 and THAW to you) were the least Tony Hawk-y and, generally, crap. I mean, I love Bam and all, but he added too much Jackass to the game.

Thankfully, his story was mostly about outdoing him with proper skating and climbing stuff, rather than the usual driving cars, blowing things up, Stuff With Shopping Trolleys and other silliness, so that was OK.

After him, I had to mod a load of lines and take photos, and then take part in a rigging demo with Jeff King. There’s not much left of the Rigger storyline now.

Yeah, I know I completed it earlier, but there’s still quite a bit to do. Not least, almost all of the Rigger storyline. Which is what I spent most of my time on.

It seems very hand-holdy. You’re told exactly what to rig or mod, and how. Yeah, you’ve a bit of freedom over adding other bits, but I’m yet to find a reason to do that.

Also completed a few more Street challenges that I’d missed, and now my stats are maxed out, I managed to get Pro on a few I previously only had Am on.

So it would seem that in order to complete the game, you just have to do X many goals, and then impress Y many pros, then do the final video with the pros in.

So I did! Hurrah!

I still have most of the Rigger stuff to go, and loads more street challenges, but the actual Story is now complete, and I got the credits and stuff. So an excellent game by all accounts. I’d sit it a little behind THP8, but ahead of THUG, THUG2 and THAW. I really should place the whole series in order of aceness at some point.