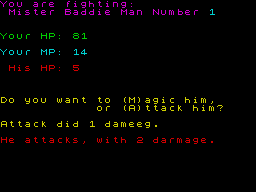 Take ‘control’ of The Main Character Who Is The Good Guy and thwart the Powers Of Evil, manifested in the form of 20 Mister Baddie Men each one More Deadly Than The Last.

Gasp in awe at the tremendous array of moves available! Gape in stunned silence as you perform the Super Special Move, entirely By Accident! Wet your pants as you make it to the final stage, with only a scrape of energy left!

More addictive than tooth removal surgery, and more playable than Toenail Tiddlywinks, this IS the game of the decade. Provided that it is of course the Bartrokian Decade, as measured by the Bartrokians on planet Bartrok in a distant solar system, where a decade is in fact exactly equal to eighteen Earth seconds.

Reviews:
“Its FANTASTIC!” – Me
“Its ABSOLUTELY BRILLIANT!!!” – David Darling
“YS Megagame!” – Your Sinclair 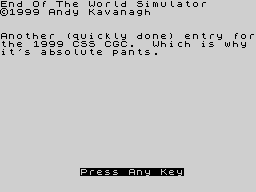 Not so much a game, more a realistic interpretation of the Last Days of Mankind.

Be stunned by the documentary-like quality of this simulation, so real that you have to keep telling yourself that it’s not really happening. Not one for the elderly or fainthearted. 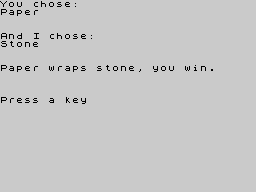 No need for hands now! Paper, Scissors, Stone brings the playground game direct to YOUR SPECCY! No longer will you need to (or even be able, without the aid of a few extension cables, and an unbrella in case of rain) play in a playgound again!

An amazingly realistic recreation, SPS ranks high in the list of Most Played Speccy Games. Assuming the list was upside down.