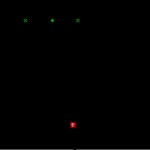 Claims to be the worst Space Invaders clone ever made, and I would be quite ready to agree. it even tells you that there is an error that occurs quite often.BUT… it does play, and error aside, it is possible to play.

This is a BASIC port of the classic 70’s smash, “Space Invaders”. And what a mind-numbingly great port it is too. Everything is there – except for speed, bases, moving missiles and everything else that made the original the great arcade blaster that it is.

The keyboard response is like very slow lightning, and the invaders can kill you with a thought. It must be that, because there was no evidence of any firing on their behalf. The game follows in the great tradition of other ascii games like Nethack (but without the playability to hamper it), with everything rendered in the glorious sinclair character set we’ve come to know and love.

Bugs – there are none. Worth speaking of, that is, because the poor error 3 when the invaders hit the right hand edge of the screen isn’t worth speaking of. Death is final unlike so many other games, as the Error B when the game over message cascades down the screen puts a neat “final” touch to your ineptitude.

All in all, a great game with a replay factor near that of a eurovision song. You’ll be playing this until the cows come home, assuming you live in a field.

This game gets a crap score of 6/10 – the author has included a game it is (theoretically) possible to win, but obviously hasn’t tested for bugs. Bugs do not make a crap game. 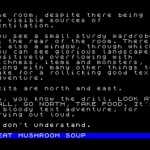 This game did make me chuckle, even if it was predictable. Why on earth would a ghost be called Minty??? Anyway, it is a quite well presented text adventure, but because of exactly that reason, it drops a point.I’ll give this 5/10.

A text adventure with a twist. Written in almost pure assembly, this is a colourful and frustratingly hard adventure. The ghost in question will kill you as soon as you do anything wrong, which is any input you care to make that the game’s limited parser will understand. I played this for literally hours (or maybe not) before giving up and looking on the tipshop
for tips… of which there are none, this being a new release.Graphically, the game excels. On the title screen, there is a neat little logo and a lovely multicolour fade effect as you are launched into a world of intrigue, windows, cupboards and inevitably death. The scrolling is second to none, considering the popularity of being able to watch it scroll in *real time* that has surfaced these days.

Unfortunately, the game seems designed to make you fail – and as such succeeds mightily. Only the dodgy scrolling makes this even slightly crap.

This game gets a crap score of 2/10, as there’s no real attempt been made at actually including a game. 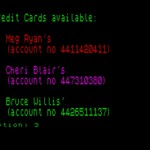 There’s not much to say about this one at all. By saying that, it should score highly as a crap game, but there’s the nagging feeling that too much effort has been made in presentation of the text onscreen, and that harms it badly.The game itself is fairly straight forward. Choose a celebrity’s credit card, and then spend as much as you can before getting arrested.

What can be more fun than lifting the bloated credit card from a top celebrity’s handbag and making off for some materialistic purchases using someone else’s bank account? That’s what this game offers, and it offers it well. At the outset, it oozes machine code quality, with varying font sizes depicting your current state. The input system involves a constantly counting “choice” from the options listed. Hitting any key selects the option currently chosen for you.

For your first few purchases, you’ll be laughing all the way to bank as you rack up yachts, security guards and expensive trinkets. Unfortunately those in the fraud detection services are hot on your tail, and will catch up eventually. You need to rack up as many pounds worth of purchases as possible before they get to you.

And that usually happens within about 5 turns. There’s no explanation as to the types of fraud you can safely commit, and as such you are left with a feeling that maybe the author didn’t actually include any.

This game gets a crap score of 5/10, as there is a game and the author has obviously worked hard on it, but the lack of any discernible structure hampers playability somewhat.