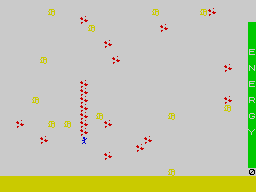 Bob Carolgees, one time major celebrity and friend to the stars, and now haberdashery shop owner in Northwich, Lancashire, has suffered a major attack on his body by his puppet pal Spit the Dog.

Bleeding profusely from almost every artery in his ample frame, you must guide him to bandages, which help stem the claret flow. Fail to collect them, and you bleed even more! Step in the spilt blood, and it’s Alien acid-like nature drains you of even more energy and life-juice!

Reviews:
“You know, it’s very realistic. What is it again?” – Bob Carolgees
“What a waste” – The Give Blood Foundation
“Polly Wanna Cracker! Squark!” – A Parrot 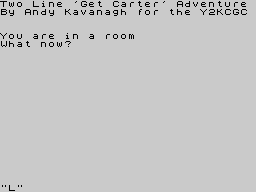 Compressing the entire plot of the Michael Caine film into a two line Text Adventure takes some talent and intelligence! The uncanny similarity to the film comes from many years watching and studying, and intense Sinclair BASIC training.

And it paid off! Look at the gorgeous graphics! The intense intenseness of the gameplay! The full-on Caine experience!

Get Carter! – Out Now for Spectrum!