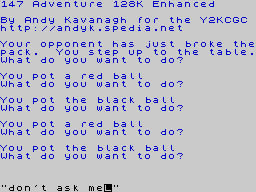 FACT: Games are all about gameplay – not graphics.
FACT: Everyone loves snooker.

Therefore, a snooker game with no graphics must be A WINNER! And lo, it isn’t. This is snooker in text adventure form! No need for flashy graphics, ball mechanics or even fluke shots – the aim is simply to “pot as many balls as you can”. All of them, in fact! 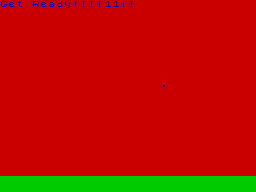 Bringing home the fun and playability of the Arcade Classic (which was never produced), Beat The Spot is a stunning game of putting mind over matter.

Hammer your keyboard in terror as the spot appears – quickly now! It’s only there for a split second!

Beat The Spot is guaranteed to keep you glued to your Speccy. Mainly because the colour scheme is so awful you burn your retinas out and you are left incapable of sight, meaning you daren’t move in case of causing injury to yourself or others!

*Due to technical limitations, this statement is a blatent lie.