We got a couple of Philips Freevents 11NB5800 laptops at work this week, and they’re actually very nice. Of course, they come with Vista installed, so we had to remove that.

Problem #1
There are no XP drivers for the Freevents 11B5800. There’s nothing in the box (not even a Vista restore disc), and Philips have no mention of any of their laptops on their website. In fact, outside of PC World’s online store, the Freevents doesn’t appear to exist.

Thankfully, the 11NB5800 is actually just a re-badged Twinhead F11Y. It took me ages to figure that out, and it was only by searching for the SATA controller chip that I made the connection. Twinhead helpfully provide all the necessary drivers for XP (and ME and 2000, if you’re that way inclined).

Problem #2
Sadly, you can’t get as far as XP installing, as the XP Pro SP2 install disc doesn’t include the SATA driver necessary for the installer to see the laptop’s hard drive. Of course, this is often a problem, but you can usually solve it by putting the driver files on a floppy disk and pressing F6 when prompted during setup.

If only it were that easy. I had a USB floppy drive and managed to find Ye Olde Floppy Diskette, put the drivers on it, and pressed F6. XP Setup recognised the drivers, and I chose the Mobile variant of the Intel SATA chipset driver, and Setup continued. Unfortunately, Setup still couldn’t see the hard drive.

Problem #3
Then, after some more Googling and getting a hint from someone having similar problems with a HP laptop, I found this page. I tried the same thing, slipstreaming the SATA drivers into a copy of the XP Pro SP2 setup disc, creating a new disc in the process. Booting from this new disc and… success! I could see the hard drive, delete the Vista partition, and start XP Setup!

Problem #4
But then, disaster! The partition formatted, and the files needed for setup were copied to the hard drive, and then the machine rebooted as expected. But that was all – the laptop froze on the POST screen and refused to progress any further. I couldn’t get into the BIOS, I couldn’t boot from a CD, and removing the battery for a while before trying again was futile. Oops!

Luckily, I had another identical laptop. I decided to try the risky venture again, only with one small (and, it turned out, vitally important) difference. On the partitioning options during setup, I deleted both the Vista and the small System Restore partitions from the drive. This time, everything worked fine and after a (surprisingly quick) installation, I was at the XP desktop ready to install all the XP drivers previously downloaded from Twinhead’s website. 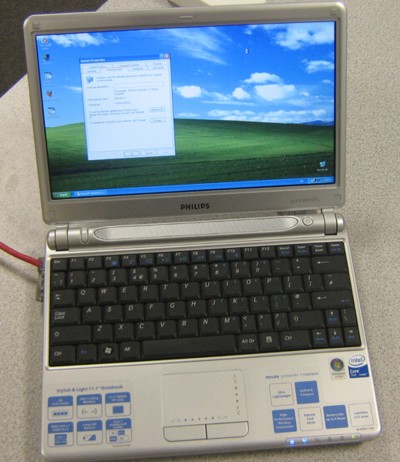 Of course, I still have one bricked laptop, but as soon as I figure out how to get the hard drive out, I’ll have that sorted by cloning the working one to it…